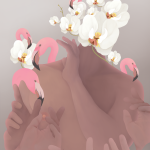 The DRAMA QUEER Theatrical Festival wants to talk and highlight the lives of LGBTI / Q people in the society through a series of theater productions with LGBTI / Q (lesbian, gay, bisexual, transgender, intersexual and queer people). It wants to alleviate homophobia / transfobia / bifóbia, which is currently gaining momentum. This is a unique event that has not yet been implemented in Slovakia. We want to create space for a new form of theater, queer theater, for people who were previously non-existent, invisible looking for a place for their identity (whether in relation to sexual orientation or gender identity). In this area their identity will not be perceived more by the keyhole of shame, trauma and humiliation, but as something special in the structure of their lives.

The target group of the festival is the public, LGBTI / Q community, students and students, youth and all who are interested in celebrating the uniqueness of life. The symbol of the festival is a stain, because its shape is always different. It's never the same picture, it's always different, altered and always original, just like people. Unlike people, we do not look at it as something wrong, but as something that is a natural part of society.
The NOMANTINELS Theater is a QUEER, which also indicates a name without a coat of arms, without restrictions, without closed boxes. We wanted to create a space where we can talk freely about our lives, feelings without the influence of a heteronomic society that draws standards of good life in the style of a traditionally nice family without problems, without pain and without faults of beauty. It is thanks to the theater that we can share, sometimes sad, sometimes funny stories that we can tell in it. None of our paths are exactly linked.

The word QUEER means weird, strange, not evolving. In English-speaking countries it also means being homosexual, which does not belong to the "healthy" world, and therefore does not deserve respect. At present, people who avoid and outweigh strict branding in society are identified. They have been called queer as an expression of the view, in order to confuse all the preserved people who called them. Queer as a person is defined by what it is not - that is, not having a prescribed gender identity, gender role, and sexual orientation. It includes, for example, heterosexual people whose sexuality and gender do not conform to the cultural standards of heteronomy and cisgenderism. In the end, the word queer is also used as a roof concept for sex and gender minorities.

QUEER Theater is used to mark a theatrical movement that includes people, regardless of gender identity and sexual orientation, performing theater plays, musicals, cabaret and everything else. He was born in Great Britain and America in the 1940s. Queer theater has not grown on the basis of scenarios written in isolation, or for the needs of the entertainment industry. It has grown from a community of people for whom theater has been more than a career - it was a way of life. Their creation of the theater was inseparable from their personal identities, their lives, their social circles, their sense of humor, their needs of love and the need for social intercourse. They wanted the same people at work as they were at home, not to hide. They wanted to rehabilitate stereotypes about LGBTI / Q people, just as they were about dirty bosses, psychotic lesbians and afflicted trances. They sought to shape the intimate sensuality of the created life through the theater. Often, it is a theater that is offended and is artistically ambitious and is going through a banal exaggeration, a twist of pop culture. So their "children's game" became a subversive strategy, cultural critique, and the formation of a society identity.

www.dramaqueer.sk. / for more information about the festival /
© All images are copyright of Marta Prokopova.
Category: Identity
Share: